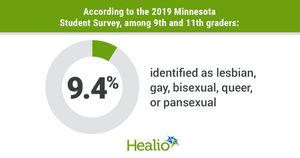 Study findings indicate that epidemiologic surveys and patient forms for adolescents should include broader options for sexual orientation and gender identity, researchers reported in Pediatrics.
The conclusion was based on data collected during the 2019 Minnesota Student Survey from 124,778 students in grades 8, 9 and 11. Respondents used a broader set of sexual and gender identity terms to describe themselves than the response options typically provided in surveys and forms, the researchers reported.
They found that 9.4% of the surveyed high schoolers identified as lesbian, gay, bisexual,