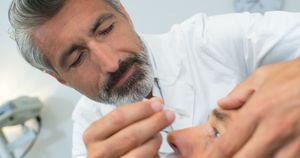 Self-reported symptoms of anxiety and depression were higher among men aged 50 years and older with vision impairment, compared with those with normal vision, study findings showed in International Health.
According to WHO, more than 2 billion people globally live with some form of vision impairment, with a majority living in low- and middle-income countries.
Ben Gascoyne, of Sightsavers, an organization that aims to eliminate avoidable blindness, and colleagues examined vision impairment and self-reported symptoms of anxiety and depression among those aged 50 years and older in Kogi State,