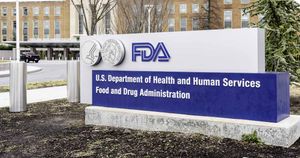 The FDA denied approval to Verrica Pharmaceuticals’ molluscum contagiosum treatment VP-102, the company announced in a press release.
A complete response letter to Verrica’s new drug application listed deficiencies found during an inspection of Sterling Pharmaceuticals Services, a contract manufacturing organization (CMO) where the drug’s bulk solution is produced. The deficiencies resulted in an official action indicated (OAI) status, the FDA’s most serious violation category.
The issues defined by the FDA were not specific to the manufacturing of VP-102.
“Based on