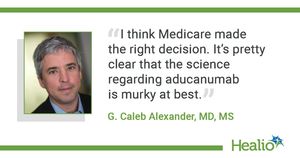 CMS announced that Medicare is limiting coverage of the controversial Alzheimer’s disease drug Aduhelm to participants who are enrolled in FDA- or NIH-approved clinical trials.
The decision was based on a review that included comments from more than 10,000 stakeholders and more than 250 peer-reviewed documents, CMS said. It is specific to patients who are clinically diagnosed with mild cognitive impairment due to Alzheimer’s disease or mild dementia and a confirmed presence of plaque on the brain.
“I think Medicare made the right decision. It’s pretty clear that the