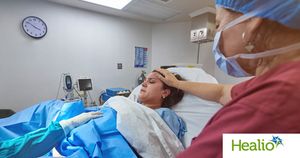 Vaginal delivery was associated with increased risk for food sensitization in infancy, with longer labor durations also promoting food sensitization development, according to a study published in Annals of Allergy, Asthma & Immunology.
This relationship between vaginal delivery and food sensitization remained consistent even when the number of siblings was considered, the researchers said.
“The potential effect of delivery mode on the risk of childhood allergic disease development remains unclear, and the current evidence is conflicting,” Tetsuhiro Sakihara, MD, of the