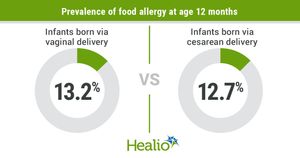 Whether infants were born via vaginal or cesarean delivery did not lead to meaningful differences in likelihood of food allergy at age 12 months, according to a study published in The Journal of Allergy and Clinical Immunology.
The lack of likelihood persisted regardless of onset of labor or whether cesarean deliveries were elected or emergent, Anne Currell, MEpi, a researcher in population health at Murdoch Children’s Research Institute in Parkville, Victoria, Australia, and colleagues wrote.
The researchers examined 2,045 infants born between September 2007 and August 2011 in the