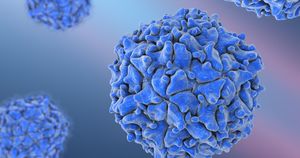 Poliovirus has been detected in wastewater in two neighboring New York counties, indicating local transmission, health officials said.
The virus was detected in wastewater samples from Rockland and Orange counties, which have polio vaccination rates roughly 20 percentage points below the state average. The counties are north of New York City.
Health officials last month announced a case of vaccine-derived polio in an unvaccinated Rockland County resident who was left paralyzed. It was the first case of polio recorded in the United States since 2013.
According to the New York State Department of