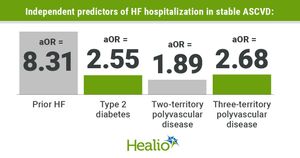 In patients with stable atherosclerotic CVD, those with prior HF were more than eight times more likely to be hospitalized for HF during follow-up, data show.
Also in that population, type 2 diabetes and polyvascular disease more than doubled the risk for HF hospitalization.
In an analysis of more than 26,000 adults participating in the TRA 2°P‐TIMI 50 trial, researchers also found that, at 3 years, outcomes among patients who experienced hospitalization for HF were poor; 30% required ICU admission and nearly 10% died.
“In patients with atherosclerotic vascular disease, we are