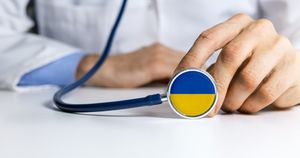 WHO estimates there have been upwards of two attacks per day on health care infrastructure in Ukraine since Russia’s invasion of the country.
As of March 25, there were 72 incidents of attacks on health care, resulting in 71 deaths and 37 injuries.
The war has prompted 3.6 million people to flee Ukraine, seeking refuge in nearby countries like Poland and Moldova. Nearly 7 million Ukrainians are internally displaced from the war. Among them, one in three suffers from a chronic condition, according to the International Organization for Migration. About 1,000 health care facilities in