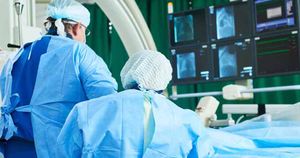 WASHINGTON — In patients with three-vessel CAD, those who underwent fractional flow reserve-guided PCI had similar quality of life at 1 year compared with those who underwent CABG, according to new data from the FAME 3 trial.
However, the PCI group had faster improvement in quality of life during the first year after their procedure and had a greater percentage of patients younger than 65 years who were able to return to work than the CABG group, researchers reported at the American College of Cardiology Scientific Session.
As Healio previously reported, in the main results of the FAME 3