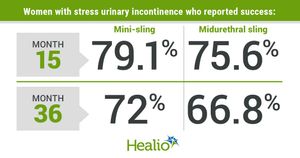 Single-incision mini-slings were noninferior to midurethral slings, which have been the surgical treatment of choice in women with stress urinary incontinence, findings from the randomized SIMS trial showed.
“In a systematic review published in 2014, we found that the percentages of patients with patient-reported and objective success with mini-slings (excluding TVT-Secur devices, which were discontinued by the manufacturer for commercial reasons) were similar to those with midurethral slings during a median follow-up at 18 months; mini-slings were associated with less postoperative pain