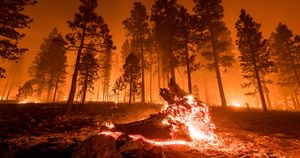 Firefighters who responded to a higher number of fires per year had a significantly greater risk for developing atrial fibrillation than those who responded to fewer fires, according to a recent study.
Researchers also found that the prevalence of atrial fibrillation increased with age, with firefighters aged at least 61 years reporting a higher incidence vs. those aged 60 years or younger. It was the top story in cardiology last week.
Another top story was about Pfizer’s voluntary recall of certain lots of BP medications due to high levels of a nitrosamine. Although nitrosamines are