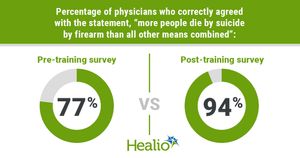 After undergoing a training program, physicians showed statistically significant improvements in their knowledge of suicide and confidence in treating at-risk patients, according to a recent study.
Suicide, which is one of the leading causes of death in the United States, accounts for about one death every 11 minutes and took the lives of 45,979 Americans in 2020, according to the CDC. An estimated 12.2 million adults in the U.S. seriously thought about suicide in the same year, and 3.2 million planned a suicide attempt.
Most people who die by suicide had contact with the health care system in