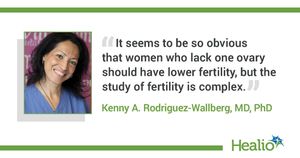 For women undergoing assisted reproductive treatment, having a previous unilateral oophorectomy was associated with lower odds of pregnancy and live birth, according to a meta-analysis published in Fertility and Sterility.
“I found it strange that in the literature, only a few [studies] have suggested a negative effect of removing a whole ovary in women’s fertility, and I thought it would be worth it to investigate this issue,” Kenny A. Rodriguez-Wallberg, MD, PhD, adjunct professor in the department of oncology-pathology at Karolinska Institute in Stockholm, Sweden, told