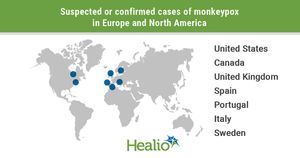 The CDC on Wednesday confirmed that a Massachusetts resident who traveled from Canada via private transportation was infected with monkeypox virus, the first U.S. case of monkeypox this year.
Cases of the disease have popped up in other countries, too, sparking concern among experts. A widening outbreak in Europe that was first reported in the United Kingdom has grown to include several other countries.
The U.S. reported two cases of monkeypox last year in travelers who had returned from Nigeria, where there has been an ongoing outbreak since 2017 — the first in 4 decades.
Faisal Minhaj,