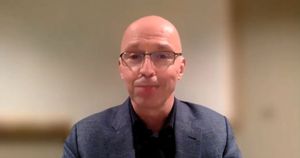 In this Endo-Sketch, a Healio video series on clinical conditions named after famous colleagues, Klaus Mergener, MD, of the University of Washington School of Medicine, discusses the origin of Mallory-Weiss syndrome.
According to Mergener, these partial thickness tears of the esophageal mucosa and submucosa are named for Boston physicians Kenneth Mallory and Soma Weiss. Mallory, whose father Frank Burr Mallory described Mallory bodies in alcoholic cirrhosis, graduated from Harvard Medical School in 1926 and spent most of his professional career at the pathology institute founded by and named