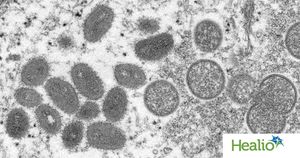 Waning population immunity against smallpox — a result of discontinued vaccination campaigns for the now-eradicated disease — “has established the landscape for the resurgence of monkeypox,” researchers said.
They came to that conclusion after systematically reviewing dozens of studies and other documents for data on the evolution of monkeypox epidemiology over the past 50 years, which revealed that cases have been increasing since routine smallpox vaccination ceased.
Their findings were published in February in PLoS Neglected Tropical Diseases, months before a growing